The Sweetest Thing by Elizabeth Musser 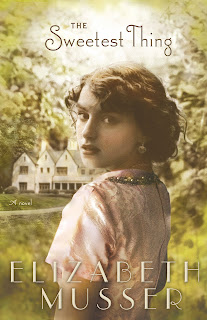 This is the story of the friendship that forms between Mary Dobbs Dillard, the daughter of an evangelist from Chicago and Perri Singleton, an Atlanta debutante daughter of a prominent banker, when Dobbs comes to Atlanta to live with her Aunt and go to school during the Depression. The book begins with Dobbs’ arrival in Atlanta, followed closely by Perri’s father’s suicide. As the story unfolds, we learn more about Dobb’s father’s past in Atlanta and subsequently and about what transpired to cause Perri’s father to take his own life. All comes out in the end and all evildoers meet their just reward. The story, however is about the friendship that forms between these two very different young girls. It is also about God’s provision even during the most difficult and trying times. It’s about Faith and questioning one’s Faith. And all that is interwoven so masterfully into the story that you never feel like you are receiving a sermon or being led down a primrose path. The characters are interesting and compelling, and the setting of 1930s Atlanta provides a history and culture lesson about our country’s not too distant past. I would recommend this book to anyone who likes historical fiction or a good mystery. There’s some romance in there too for those so inclined.
Posted by MzKCKitty at 8:59 PM No comments: