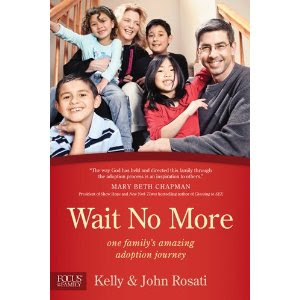 This book is a true story about a subject dear to my heart: foster care and adoption. I have been a foster parent and my children are foster-adopt parents. Many of the situations mentioned in this book struck a chord with me.

John and Kelly Rosati became interested in foster care and adoption when he was stationed in Hawaii in the Air Force. Their first experience, a one month foster care stint with an 11 year old girl very nearly put them entirely off the idea altogether. God, however, had other plans and sometimes reluctantly, they began to follow those plans and the adoptions fell into place one at a time. Although they felt happy with two adopted children, eventually two more came on the scene and they now have two boys and two girls. The family now lives in Colorado where Mrs. Rosati works for Focus on the Family.

Anyone considering adoption would do well to read this story and get a taste of what the process entails. It is not an easy process by any means, but there are many waiting children in the United States and if someone is willing to provide them with a family and has the desire and the stamina to go through the process, the rewards are great for all involved. The process varies from state to state but is pretty much the same as described in this book in most states.

This book will be a great resource for adoption agencies, families looking in to foster care and adoption, ministries that support adoption and other related organizations.

In addition to containing a lot of useful information, this book was just enjoyable to read and very well written. I read it through in one day.
Posted by MzKCKitty at 11:41 PM No comments:

A Whisper of Peace by Kim Vogel Sawyer 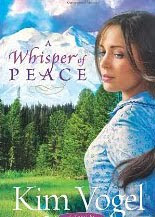 Wow! Kim Vogel Sawyer has done it again. She has woven a beautiful story encompassing the wonder of God’s Love and an intriguing historical setting. This book takes place in Alaska among the native people there. Clay Selby and his sister, Vivian, go as missionaries to a native tribe and meet Lizzie, a woman with a native mother and a Caucasian father. Their struggles to reach the people in the tribe and Lizzie’s struggle to belong in her mother’s world, along with Vivian’s struggle to reconcile her past all make for an interesting story. This is another one of those books you can’t put down until you have savored the last word. The sweetest part of it is the acceptance of the Father (God) by the people in the story and the firm reliance they put on His care.

Much rich detail in contained in this book and obviously Ms. Sawyer did a lot of research. I love the setting of this story and I love the fact that it is about missionaries. The missionaries of the past and the missionaries of the present are my personal heroes. The wonderful way Ms. Sawyer tells the story of their faith and reliance on God makes it obvious that she has a deep personal relationship with the Father. So many books of Christian fiction just do lip service to God and personal relationship with Him, almost an afterthought added in to make it “Christian.” Not so, here. I was so blessed by this book. It renewed my zeal to see others given an opportunity to embrace His salvation. Thank you Bethany House for giving me this book to review. And thank you Ms. Sawyer for another wonderful book to read. I am waiting in great anticipation for the next one to be published.
Posted by MzKCKitty at 10:26 PM No comments:

A Most Unsuitable Match by Stephanie Grace Whitson

A Most Unsuitable Match
By Stephanie Grace Whitson

This book had some surprises. It was interesting to learn about the boats going to the Montana goldfields and the reality of the harsh life once one arrived there. The heroine was somewhat daring but a LOT naïve. All the characters in this book were interesting in their own right.

The story is about Fannie who after the death of her parents discovers she has an aunt she hasn’t met. Disillusioned by the state of affairs she finds herself in and the poor management of her financial advisor, she takes off to find her aunt. The people she meets along the way and her aunt, when she finds her, help shape her life and turn it in an entirely unexpected direction.

The author left out some details at the end that would have helped resolve some of the conflict in the story, so one is left wondering if a sequel will ensue in which we will learn more of those details.
All in all, this was a very delightful book and I am grateful for Bethany House giving me the opportunity to review this book and discover Stephanie Grace Whitson who will join my list of preferred authors.
Posted by MzKCKitty at 11:43 PM No comments: