The Midwife’s Choice by Delia Parr 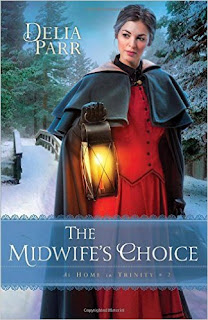 This is the second book in the At Home in Trinity series. I did not read the first one but this one stands alone. It does, however, leave some loose ends to be resolved in the next installment. Martha Cade is the local midwife. She and the local doctor help each other in their practices. The local mayor is an old boyfriend that she is being reacquainted with. She misses her two grown children and is presently living with two ladies who own the confectionary shop because the tavern that had been in her family for several generations had recently burned down. The story revolves around these people, some of Martha’s patients and other townsfolk. There is a lot of stuff going on. It almost was so much different stuff going on that it didn’t seem real. Martha didn’t really seem like a very nice person much of the time and the actions and conversations of the characters seems a little strange at times. I did enjoy the story, however, even though I would have liked a story with a little better flow.

I received a copy of this book from Bethany House in exchange for a fair and honest review.

Posted by MzKCKitty at 8:20 PM No comments: