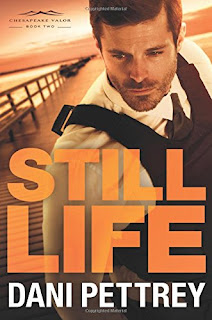 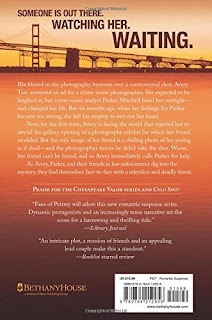 This is the second book in the Chesapeake Valor series. I was so excited to receive it from Bethany House in exchange for a review since I loved the first book and was waiting for the sequel. Now I have to wait several months for Book 3 (oh man!).


This story concerns Avery, whose past comes back to her when her friend Skyler comes up missing. She has been taking forensic pictures for a crime scene analyst, Parker Mitchell, who becomes involved with her on this case along with their other friends who consist of several other law enforcement types (FBI, etc.). Avery goes to a showing at an art gallery as Skyler’s guest but Skyler does not arrive and the portrait of Skyler that was the featured portrait in the show has been replaced by another picture which was not done by the featured artist. The artist is incensed and Avery is devastated because her friend never arrives. The artist orders the picture thrown away but Avery manages to sneak it out and save it so they can check it out for clues. There are several things going on as they retrace the steps of Skyler and others. In the midst of the investigation, another investigation comes along when a terrorist makes his way ashore after being smuggled into the country. There is a lot going on but it all builds into the conclusion which is unexpected, to say the least.


Dani Pettrey keeps getting better and better! I love her books and they will always be permanent residents in my bookshelf.

Posted by MzKCKitty at 8:58 PM No comments: