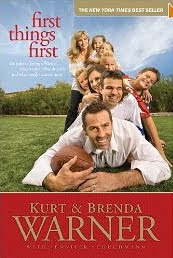 When Tyndale offered me this book to review I thought it looked interesting. I was intrigued with the idea of a professional football player who was a Christian and a family man. However, I had no idea who Kurt Warner was and I certainly am not a football or sports fan.

One typically thinks of professional football players as rather large juveniles whose main goal in life is to have a good time at the expense of whoever gets in his way. This story is about the antithesis of that. Kurt Warner married Brenda when she was a divorced mother of a disabled toddler and an infant. He made it his goal in life to make her life and her children’s life a good one. They ended up having 7 children in all now ranging in age from late teens to toddlers.

This book is about what works for the Warner family and how they are raising their children to be responsible human beings. It’s about how they all treat each other and how much they love each other in the process. These two parents each brought their own personal baggage into their marriage and have worked very hard at their relationship and making it all work for everyone involved. It’s a fun book because they are able to be truthful about their past and even laugh at themselves at times.

One of my favorite stories was when Brenda and her son were at one of Kurt’s games and a fan from the other team was sitting in front of them. The person in question became annoyed at Brenda’s loud encouragement of her team and told her that if she didn’t stop that she would strangle her with her scarf. Brenda’s son looked up from his DS and said, “I think you can take her Mom.”

If you want an inspiring story about faith in God, parenting and marriage or if you just are a fan of Kurt Warner’s and want to know more about his life, you will find this to be a very enjoyable book. It’s not a novel, it’s a true story, but it is still a page-turner.
Posted by MzKCKitty at 1:39 AM